skip to main | skip to sidebar

Shipping on the Shannon 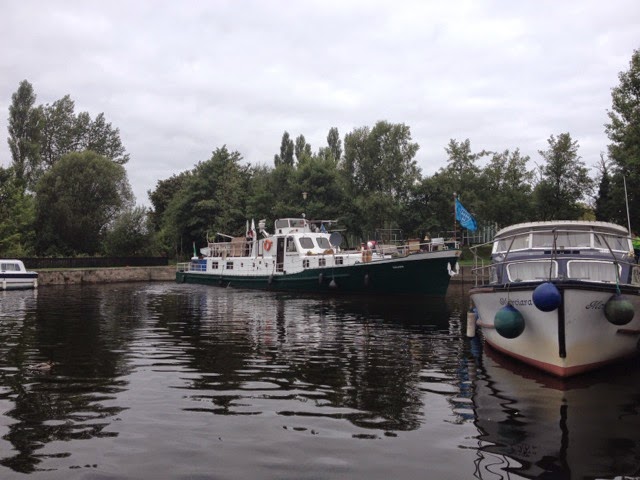 When we pulled into Dromod this ship was taking up the whole of the end wall. It was Thalassa, a vessel we first saw cruising up Lough Derg. We were in Terryglass, a crowd of us leaning on the wall, staring astonished at this elegant monster, asking foolish questions like 'What is it?'. She tied up on the outer wall, crew and four Jack Russells on board (two of them pregnant). (Jack Russells that is). We had a tour, as did the rest of the harbour. They'd only just brought the boat onto the Shannon, so were still in proud showing-her-off mode. Half the boat is taken up with engines, one of which is the engine to start the engines. She used to be an American patrol boat on the Rhine.

Next morning Thalassa was leaving, but this was no easy lifejackets on and off we go. The pre-engine was rumbling well in advance, giving time to clear boats out of the danger line. The corner behind Thalassa was first. We were tied up on the wall where the harbour narrows - it's not the easiest of harbours for a big boat, requiring a jinking motion as you come in and out. 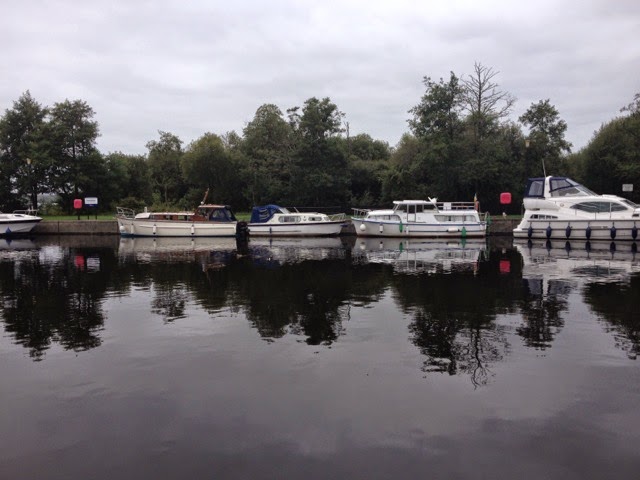 We moved to the opposite side before Thalassa began her manoeuvres. Here she goes. 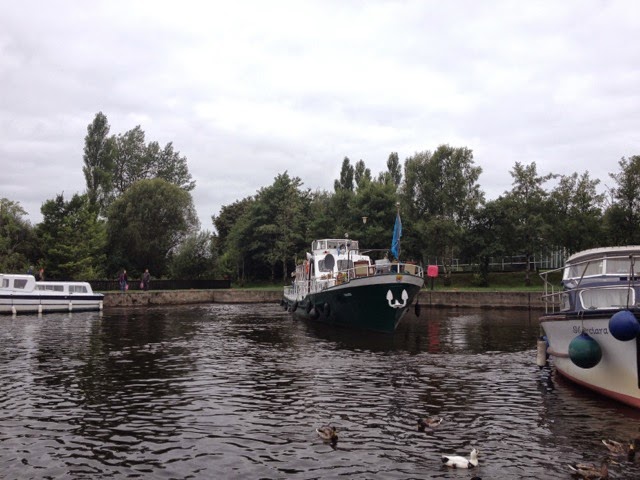 The ducks are too busy to notice - someone's throwing bread for them. 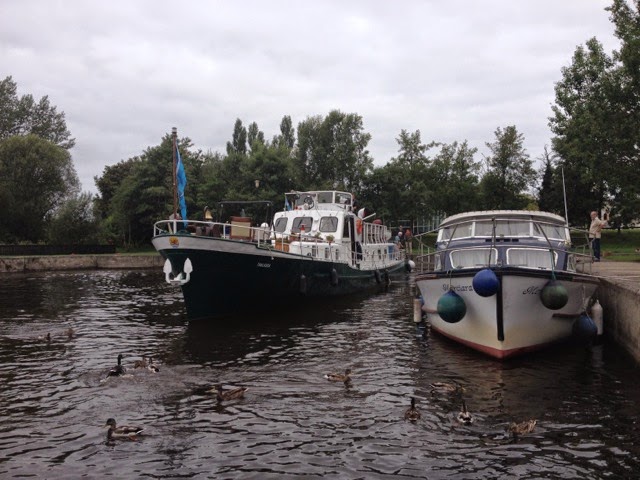 I've done this back to front. Before Dromod we were in Drumsna where there was a snorkel / swim in aid of the Simon Community organised by the local sub-aqua club. Forty odd took part, starting below the weir (of course) in Jamestown and following the bend of the river to Drumsna. It took about an hour. Here's some recent arrivals at the slip in Drumsna. This fellow looks like he's grown an extra-long arm. 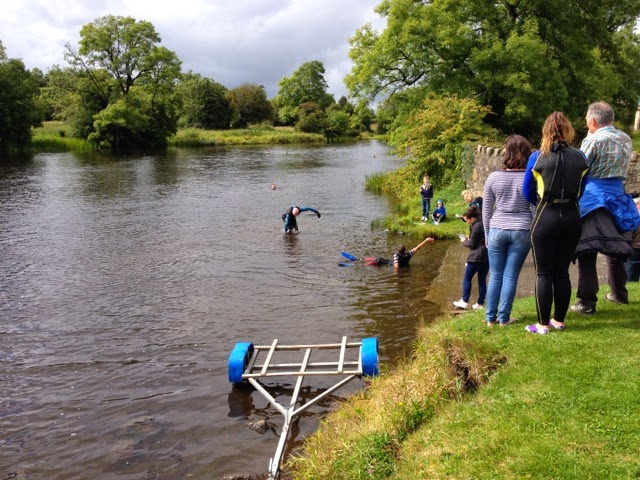 It was here we met Donnacha Kennedy and his wife Tikkie - their grandson was swimming. It was Donnacha who, in 1975, raised the barge 45M from the bed of Lough Derg, where she'd been resting since she sank in the winter of 1946. I love those unexpected meetings on the river.

Here's Aoife in Rooskey saying 'won't'. She'd just gone belting down the road towards the lock, then trotting back, full of purpose. I've no idea what the purpose was. It's usually to sniff, but not this time. I had trouble keeping up with her. She's had a series of four weekly injections of a drug called Cartrophen, and it's made the world of difference. She was barely walking ten metres before the treatment. It's for arthritis, has mending properties as well as painkilling. At nearly sixteen it's given her a new lease of life (in being bolshie as well as walking). 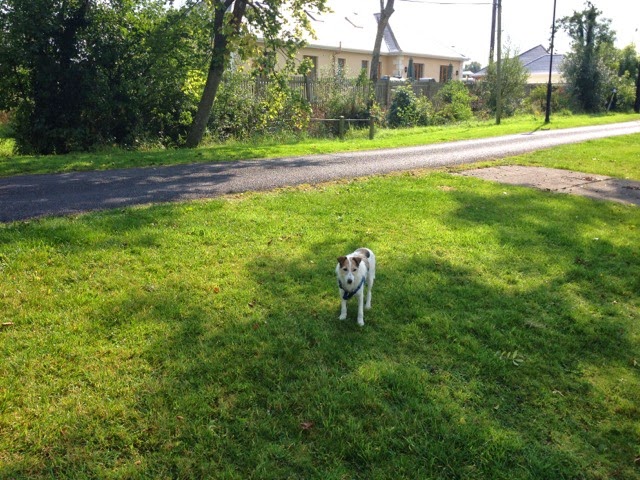 And here's Winter Solstice in Rooskey. I've just put this in as I like the photo. 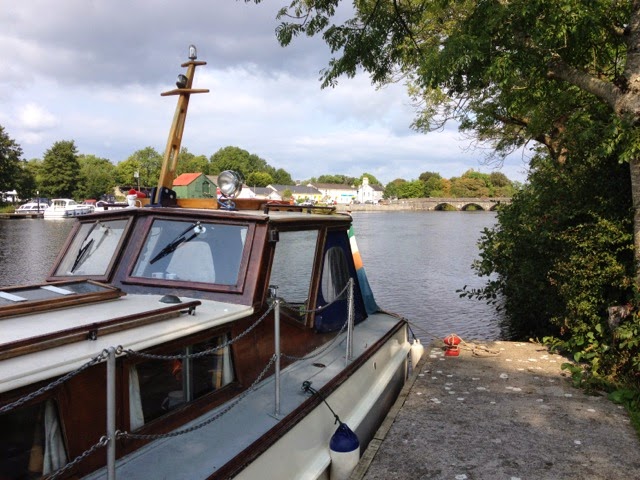 Posted by floating boater at 1:45 PM

The Skipper & Her Mate

The story of Winter Solstice, Joe and I on the Irish Waterways. Published by New Island Books, Dublin.

floating boater
Two blogs now. Floating Boater is mostly about our life on the waterways of Ireland on Winter Solstice, our timber cruiser. She's a Rampart 32 built in 1969 in Southampton. She was one of the last this size to come out of the Rampart boatyard – plastic was the material of the future. So a classic but with a definite sixties bent. Every summer we take off on the astonishingly varied waterways of Ireland and enter another, sweeter world. In between I tend my vegetables, look after our acre or so of garden in East Clare, write poetry, and teach and play flute. I occasionally have to do other paid work too. We're on the move from our present house and I have a new acre to begin. So Mucky Fingernails is the gardening wing. It's a record of the creation of a new garden, starting from an open field.